Last week, I had my first introductory game of Dracula’s America: Shadows of the West with a local player who’s heavily into it. Being a fan of weird west and Deadlands, this book by Osprey Games had me eyeing it for some time, as they share a similar vibe, even if their background is different.

Dracula’s America takes you in an alternate post civil war in the United States, where Dracula took control of the Union after infiltrating it and having President Lincoln and other big wigs assassinated. He has now declared himself President for life, and rules the Union with an iron grip, with the help of his Red Hand Coven. Multiple faction rose forth from these events and now vie for dominance, or mere existence, in this magic filled weird west. 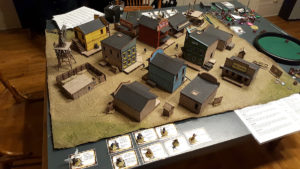 Luis, my host, knows how to make you like a game! He had a fantastic table set out, fully painted models, custom character cards with pictures of the associated models on them, a western-like soundtrack playing, and even a couple glasses of whisky on hand. Just look at the pictures I included in this post, you’ll get an idea of how well it all looked. 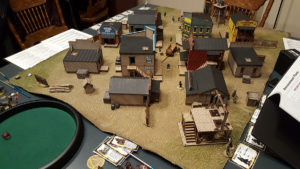 In our game, he was playing a posse of Red Hand Coven, Dracula’s own henchmen, while I was in charge of their natural enemies, The Twilight Order, a band of crusading vampire hunters. The scenario we played was a simple shoot out, with the added twist of a small zombie infestation in the town (assuredly organized by the Dark Confederacy!). The zombies proved themselves to be a lot more of a pain than we anticipated, and probably half of Luis’ lost models were from fighting them! 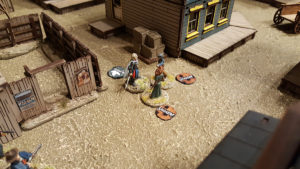 A lot of cool aspects of the game were displayed during the session. We both were able to summon some support to reinforce our posse; I even got to summon the Seraphim, a mighty angelic gunslinger. Luis got a commanding presence of the center square after placing a gunman on lookout in the second story of a building, which made my advance a lot more difficult. My Templar proved her melee prowess by dispatching a couple zombies by herself, even after being crowded out by their numbers, but sadly later fell to the vampiric entity summoned by the Red Hand boss.

I really liked the system. It’s simple, yet flexible in how you can manage your activations and models. It has a nice cinematic feel to it, I’m sure enhanced by the superb table we were playing on. We didn’t go through everything possible in the game, like the encounters, special weapons, mounts, the campaign system, etc, but I am sure looking forward to it!

My next steps are simple: go through the book again now that I have a better grasp of what I read, look over the different factions playable, and hunt for some miniatures and build myself a posse. I need to be ready when the next campaign starts!