May has ended, and the summer heat is on. It’s a good thing most of my hobby is done in a cool basement.

Most of my time this month was done working on terrain, painting it, and sculpting. That left little time for minis. I however got three miniatures painted from Anyaral, the Worl of Twilight. All three were done for their annual contest, the two small creatures for their critter category, and the Fubarnii Elder as an add-on to the balloon I made for their Freestyle category. I might retouch him a bit later, as I am not sold on my initial colour choice.
Result: 3 painted,  18 yearly

I have put the Chronopia inspired dwarf on hold. There are too many learning mistakes on him, and I’m not having fun anymore. He is shelved for now, we will see if I bring him out again in the future.  I did however start, and finish, a second stuffies this month, an hippo ballerina. I also started a second goblin pirate, which is still wip.
Result: 1 sculpted, 6 yearly 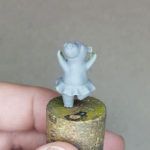 Most of my time this month has been on this project, a Fubarnii balloon for the World of Twilight. It’s the first part of a bigger piece, but I think it’s big and complex enough to count as a piece by itself.
Result – 1 done; Built: 2 yearly, Painted: 2 yearly

Gaming has been really limited this month, only two games of Guild Ball with Steve. I have been trying my new Engineers both times, and it has not been a success at all. I need to get more reps in with them, to do better on the clock and with my positioning.
Result: 2 played, 27 yearly

No old minis on the table this month, just new stuff. The gap widens!
Ratio: 3 old vs 13 new