Now that 2017 is over, it’s time to think about 2018. What will this new year bring us? What will we try to achieve? Let’s plan and dream a little, shall we.

I’m going to go for my usual one model per week goal, which I failed at for the past two years. I’m already at 7 models this year and we’re only mid-January, so it’s a good head start. I will be taking less commissions, so hopefully I should have a better control of what hits the painting table.

A small list of what I want to tackle on the painting side:

Last year brought back to the front how much I like sculpting. I am not a fast sculptor though, and still discovering techniques and materials, but I would like to have a complete new sculpt per month done this year.  Getting better at casting also fits in there. Optimally, I would like to be able to get a line big enough to warrant a web store or even run a small crowdfunding project, but I think that might be a goal more fit for 2019. 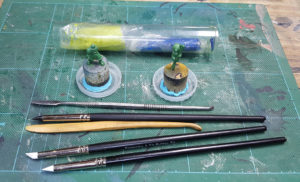 I really like working on terrain, and find it a great change of pace compared to the rest of the hobby. However, it’s also fighting for my time with painting, and now sculpting too. I don’t want to over plan, but getting one smaller themed board and some custom scatter terrain done for a different game would be good. I have a themed board idea for Pulp City to match my A.R.C. bases in mind, and being only 2’x2′, it keeps it at a manageable level. Maybe one of my old plans for an Endless Fantasy Tactics board could work also, as I sold my first two and don’t have one to play on now.

I don’t keep as tight a tab on my games played as I do for models painted, so I’m not too sure how many I played last year, or of what. A game a week seems reasonable as a goal, especially as I don’t really attend tournaments which are a great way to boost that number. Guild Ball and Warmachine/Company of Iron remain at the top of my list, as I like both games but also have steady and available opponents for them.

I like diversity though, so I won’t limit myself to just 2 games! From my current stable, I would like to be able to list most of Pulp City, Warmaster, 9th Age, 40k or Shadow War Armageddon, Dropzone Commander, Roots of Magic, Uncharted Sea or Man’o’War, Relics and Relic Knights in my played games next year, to name a few.

On the new games side, I would really like to try Arena Rex and Deepwars this year. I own miniatures for the first, some even painted, and my regular gaming buddies also, so it shouldn’t be too much of a reach. The second game I’ve been looking at for a while, I even got the rulebook, but finding an opponent for it is more complicated, and makes getting the minis a low level priority. We’ll see.

Last for gaming, I would like to find a game that I can get my 7 years old son into. We play boardgames, and he has some interest in minis, but finding a game simple and fast enough for him to play, in French as he doesn’t read English yet, is difficult. I think Relicblade could fit style wise, but the cards are available only in English right now. I’ll have to either translate them or find something else.

I don’t see News of the North going away any time soon. It is a time investment in the research side, but I do enjoy keeping up to date with releases. There was talk of maybe doing a video version of it, but that would make the editing longer, and we like the small amount of work required to release it, so I’m not sure it will happen.

I have no idea what will happen with the main show. We had so few releases last year, we are on the verge of podfading. That’s something that will need to be discussed soon between the co-hosts.

I do like podcasting though, and miss doing it more. I don’t have any plans, but maybe a new show with a different thematic or approach might be in order, or a change to the format of Geeks of the North to make it easier to release on a steady schedule.

The painting event Colore ton Monde is still in talk, but we don’t have a solid date yet. In collaboration with Steve, we also want to get the local Guild Ball scene back to a healthier state, so we will be running more events and tournaments for it, namely the East National Championship. More on that soon.

As a participant, the only “big” event on my calendar this year is CaptainCon, that is happening in a mere couple of weeks. I would like to attend more local events, but that will depend a lot on how stuff develops at the family level, and I can’t plan for that in advance. I will have to go with the flow.

Happy New Year! That was a long post, but hopefully interesting to read. What does your year 2018 looks like?