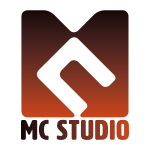 Last March, I had the pleasure of painting the M4 buildings demo kit for the project MC Studio launched on Kickstarter. The laser cut cardboard buildings are well designed, surprisingly sturdy,  and fun to paint. Once the project was over (successfully, I must add), I discussed with the laser man about future project and the first thing that came was doing a tutorial for the painting of the official scheme. Life sadly took its toll on my free time in the following months, but finally, here is that tutorial.

So here are the steps to paint the M4 buildings like the ones in the initial demo kit.

Small note: this guide is only an example, and you can paint those a multitude of other ways, like using spraycans or large brushes, using different colour schemes, or add a lot more weathering. The building are yours.

The M4 series’ buildings come in precut cardboard sheets. You simply have to finish the cuttting with a sharp hobby knife to get the pieces out of the frame. 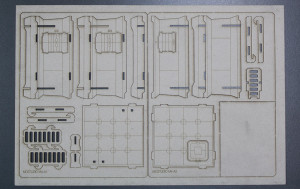 The laser cuts leave a black soot on the edges. It’s recommended to clean it up using a dry cloth or some cotton swab. This will help paint adhere better to the edges. The left end of the picture is how the cardboard comes, and the right end is after cleaning. 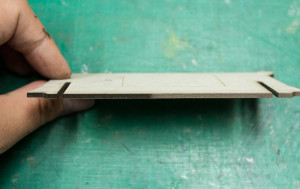 Optionally, you can use a fine sandpaper to etch the surface of the cardboard and remove the paper fibers protruding from it. It isn’t major and can be skipped, especially if your cardboard isn’t too fuzzy.

Most of the M4 series buildings don’t need to be glued at all. I however recommend (and MC Studio too) to glue the roofs to add durability. Once glued, they don’t take much space and are useful to carry the doors and ladders. White glue (Elmer’s glue) will do the job. 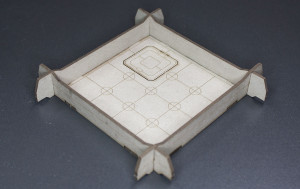 Before jumping into the painting steps, first a word about the tools used. For most of the work, which was the priming, base coats, shading and the OSL, I used an airbrush. Similar results could be had with spraycans. The rest was done with a regular brush.

The first painting step was to apply the primer. Cardboard “drinks” a lot and the primer helps to seal it and make the next coats grip better. I used Stynylrez Grey Primer from Badger as a primer but also as a base coat for my grey walls. Two coats were enough to get a opaque look without soaking the cardboard wet. 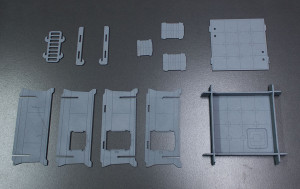 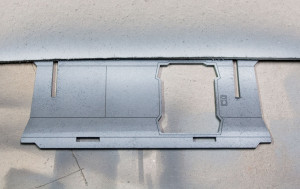 For the darker shading at the bottom of the walls, I did one pass with a mix of Grey Primer and Minitaire Raven Black and Lagoon Blue. 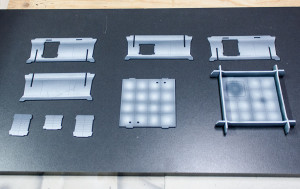 To paint the two horizontal stripes, I first masked the grey parts with painter’s tape. Be sure to use the lowest adherence level of tape available, as the cardboard surface is susceptible to peeling when you remove the tape. Too strong a tape could ruin your work. If it does happen, just repaint the damaged part by brush and use those as a first base for some weathering or battle damage. 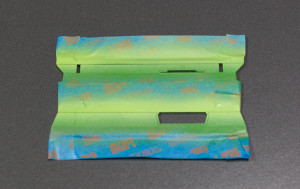 The green stripes were first painted with a coat of Minitaire Fresh Grass, then a second pass was made at the top to shade it with a mix of Fresh Grass, Irradiated Yellow and Snow White. 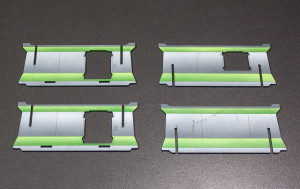 Once you’ve removed your tape, the biggest part of the painting is now done, and most of the airbrushing is also behind us. 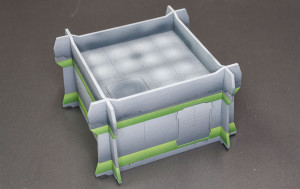 The doors’ frames and handles were then painting with P3 Greatcoat Grey. The top of them was highlighted with a thin line of a mix of P3 Greatcoat Grey and Morrow White. The octogones on the roof and floor  were painted with the same colour. You can do it by brush, but I did it with an airbrush and a custom stencil I cut into plasticard. That’s not needed if you’re only painting a single building, but you’ll save yourself time if you have multiple of them to do. A shade was apply to the center of those using Minitaire Base Grey.

For the lights and screens, I first did the glow effect (Object Source Lighting, or OSL) with P3 Heartfire with the airbrush. The rest of the work was done with a regular brush. The top right of these elements was painting with Minitaire Bark and the bottom left with a mix of P3 Heartfire and Morrow White. A tiny dot or line of Morrow White is finally added at the top right, in the brown area, to give the illusion of the screen reflection. 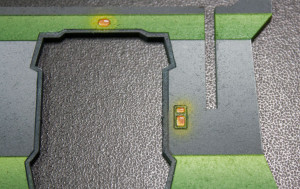 The ladders were painted in a similar way to the walls, but with different colours. The base coat was a mix of Minitaire Raven Black and P3 Greatcoat Grey applied with the airbrush, followed by some shading with Minitaire Base Grey on the ladder threads. The edges were highlighted the same way as the walls using Minitaire Base Grey, and some P3 Morrow White for the lighter threads. 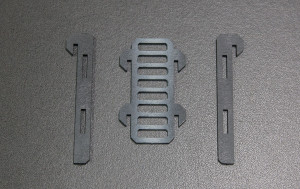 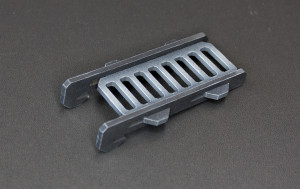 Your building is now fully painted and ready to use. If you want to push it a bit more, you can weather it. I did it with dry pigments applied by brush, then sealed with a matt varnish. I concentrated on the bottom of the wall, the floors and the ladder threads. The pigments used were Medium Earth by Forge World and Dark Red Ochre by Vallejo. 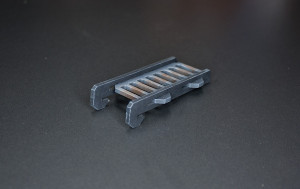 That’s it folks. Have fun painting! 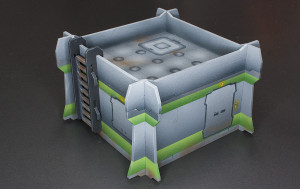